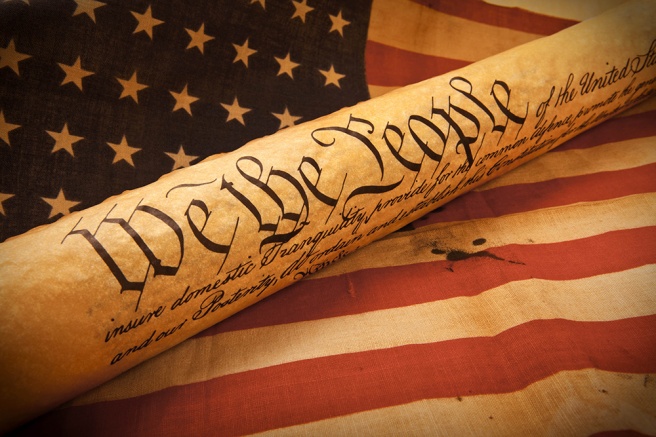 On September 17, 1787, the delegates to the Constitutional Convention met to sign one of the greatest documents ever created:  The United States Constitution. In 2004, the late Senator Robert Byrd led the effort to rename the day ‘Constitution Day and Citizenship Day,’ which requires public schools and institutions to provide information on the history of the country’s constitution.   Our Founding Fathers would likely be pleased that the document they signed 232 years ago is still providing inspiration and guidance for American citizens and other countries around the world.

I was re-reading a letter I wrote to an attorney nearly two decades ago, who was striving to remove any vestige of our Judeo-Christian heritage from our country.  I have always maintained that religion has an appropriate role in the public square.   His position, of course, is that faith should be removed.  My answer to him was simple: ‘base your arguments on the US Constitution, not letters from dead Presidents.’ He had a clear misunderstanding of the Establishment Clause, despite the law degree, and was citing a letter in defense of free exercise of faith from a man who was not even present at the passage of the Constitution.

The United States Constitution is the one document in our public life that operates as a social contract between citizens and government, defining our basic rights and the limits of government with three main purposes:  First, it creates a federal government comprising of a legislative, an executive, and a judicial branch, with a system of checks and balances among the three branches.  Second, it shares power between the federal government and the states.  And third, it safeguards the liberties of all citizens.

The United States Constitution is an indisputably remarkable document, enduring in a world much different than the one in which it was written.  Our founding principles are critical as our country moves forward, if we are to survive as a nation.  It is one area in which Americans are likely to find agreement.  The power, scope, and reach of the government is clearly defined by a simple reading of the document.   Since the only oath every member of Congress takes is to defend the Constitution, it would seem that citizens would place a high priority on this governing document.  However, we are reminded, that interpretations of the Constitution can hold opposing views.

Limiting the power of government and protecting the rights of our citizens is something we must all make a conscientious effort to protect. We should be especially appreciative for the protection afforded in our Bill of Rights, especially our most fundamental rights—freedom of speech, religion, protest, and our equal protection under the law. A free society does not just occur. It has to be deliberately and intentionally preserved. Eternal vigilance is the price of freedom.

The founders knew it wasn’t a perfect document, yet the Constitution has adapted and prevailed. On Constitution Day, take a few minutes to read the document for yourself. In order to protect the values, we hold so dearly, we must guarantee that generations to come will embrace and uphold the one thing that sets us apart from every other nation. That one thing is the United States Constitution.

JC Bowman is the Executive Director of Professional Educators of Tennessee, a non-partisan teacher association headquartered in Nashville, Tennessee. Permission to reprint in whole or in part is hereby granted, provided that the author and the association are properly cited. For more information on this subject or any education issue please contact Professional Educators of Tennessee.

From the schoolhouse to the statehouse, former teacher, Marine, and current CEO JC Bowman has an extensive background developing legislative priorities, evaluating existing education policies, and coordinating political activities with policymakers and education stakeholders. He is a nonpartisan writer focused mainly on education policy and is a regular guest on television and radio programs at the local, state and national levels. View all posts by JC Bowman